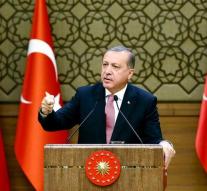 ankara - Turkey must tackle those responsible for the failed coup, but that should be done according to the law and respect for human rights. That Secretary General Thorbjørn Jagland of the Council of Europe said on Wednesday during his visit to Turkey.

Jagland did with the Turkish Foreign Minister in Ankara and press conference. He is so far the highest European representatives who have visited since the coup attempt on July 15 Turkey.