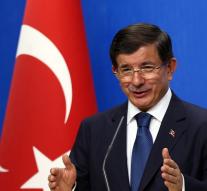 ankara - Turkey contacts with NATO and with the United Nations about the incident with the Russian fighter jet. Tuesday fired according to Ankara two Turkish F-16 fighter one of the Russian forces down. The unit would have violated Syria 's airspace from Turkey. The Turkish prime minister Ahmet Davutoglu has discussed this with the Minister of Foreign Affairs Feridun Sinirioglu, reported Turkish media.

The Russian authorities claim in Moscow that the plane was flying all the time over Syria. Furthermore, according to Interfax news agency by sources at the Defense Ministry in Moscow said the Russian aircraft from the ground is torn down.

Using Russian combat helicopters searched for the two pilots of the downed Russian SU- 24, reported Turkish media. One of the pilots would be in the hands of a militia of Turkmen Syrians. These are opponents of Syrian President Bashar al-Assad and the jihadists.