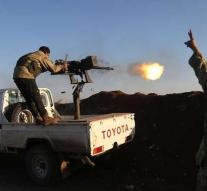 istanbul - The Turkish army claims that it has hit 108 targets of Kurdish militants in a military operation. The army reported this a few hours after the announcement of the beginning of the Olijftak campaign. It is aimed at Syrian-Kurdish militias in the Afrin region in northern Syria.

According to the YPG, Turkey has hit districts where civilians live with the air strikes. 'We have no choice but to resist the aggression', the YPG said in a statement.