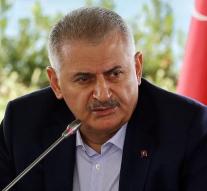 - Turkey will start interfering more in the coming months with solutions to the war in Syria to prevent the country is divided along ethnic lines. That said, the Turkish Prime Minister Binali Yildirim Saturday.

Turkey fears a strong position of the Kurdish groups in Syria. Domestically, Turkey is engaged in a fierce battle with the Kurdish PKK.

According to Yildirim, the Syrian President Bashar al-Assad's stay on as interim leader. However, in the future there is no more room for him in Syria, said the Turkish Prime Minister told reporters.