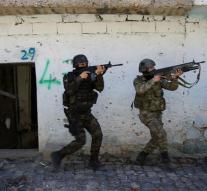 ankara - The Turkish Army has killed fourteen members of the Prohibited Kurdish Labor Party PKK during an air attack in northern Iraq on Saturday. That's what the army reports in a statement.

Six Kurdish warriors were killed during an air raid around Sinat-Haftan and eight in the countryside at Adiyaman. The PKK, which has been fighting for more than thirty years against the Turkish state, has camps in the mountains in northern Iraq, near the Turkish border.

Turkey has raised the attacks against the PKK in northern Iraq and the Syrian-Kurdish militia YPG in recent weeks. YPG is in Syria the most important partner of the West in the fight against terrorist movement Islamic State. Turkey sees an extension of the PKK in the militias.