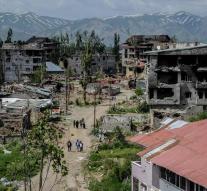 diyarbakir - Turkish military on Saturday 35 militants of the outlawed Kurdistan Workers Party (PKK) slain when he tried to storm a base in the south-eastern province of Hakkari. That military officials reported.

They also said that the death toll from fighting in Hakkari on Friday has risen to eight soldiers. Another 25 were injured. That happened by an attack by suspected PKK fighters.

The armed wing of the PKK commits since the cease-fire has been suspended regular attacks again. Police and army are often the target. The Erdogan government does from time to time with retaliation.