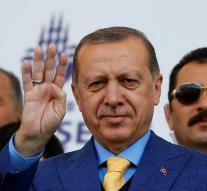 ankara - The Turkish Army has certainly killed 13 members of the Kurdish secretion movement PKK during air strikes during Sunday in northern Iraq. That's what the army said in a statement.

The fighter aircraft fought seven PKK targets in the Avashin-Basyan region. According to the army, the killed militants were preparing to attack.

During another air attack, Saturday in the province of Van in southeastern Turkey, ten PKK fighters came to life.