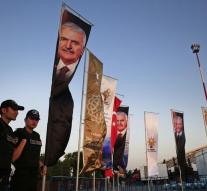 ankara - Six years after the storming of the Mavi Marmara ship, which transported supplies to Gaza, Israel will pay the relatives of killed ten Turkish crew compensation. The Israeli government will pay a total of $ 20 million compensation, said Turkish Prime Minister Binali Yildirim Monday in a televised press conference.

As a result of the reconciliation both nations will exchange ambassadors as soon as possible, said Yildirim. Under the agreement, Turkey will also humanitarian aid and other non-military goods supply to Gaza.