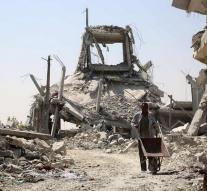 beirut - The Turkish army with Syrian rebel attacks on villages in northern Syria that are militias supported by the US hands. That accusation comes from the militias in villages near the city of Manbij.

The militias are the Manbij Military Council and part of the Syrian Democratic Forces backed by America (SDF). Which together with the Kurdish YPG militia's main allies of the West in the fight against IS.

The villages are about 27 kilometers from Manbij. The Turkish president Erdogan announced this week that the city is the next target in the campaign of the Turkish army in northern Syria.

The US military said Wednesday that rebels were attacked in the same area supported by the US by Russian and Syrian aircraft. As concerned the rebels of the Syrian Arab coalition. According to a US Army commander thought the Russians and Syrians that they were fighters of the Islamic State. It was recorded quickly in touch with the Russians after the bombing stopped.