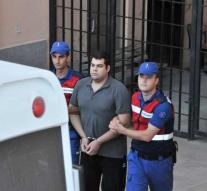 athens - The Turkish court has released two Greek soldiers on Tuesday, pending their trial. The two were held in the country since March. That reports the Turkish news agency Anadolu.

Turkish security services arrested the two. They are suspected of the unlawful intrusion of Turkey and an attempt at military espionage. According to Greece, the two soldiers accidentally landed on Turkish territory when they followed illegal refugees. According to Anadolu, the investigation will be continued against the two.

'The release is an act of justice and will strengthen friendship, good neighborliness and stability in the region,' said Greek Prime Minister Alexis Tsipras in a comment.

The matter woke up the tensions between the two neighboring NATO allies. The government in Athens spoke of a hostage situation.

Conversely, there are eight Turkish soldiers in Greece who had fled Turkey after the coup. Turkish president Recep Tayyip Erdogan called on the Greek government to deliver the eight. The Greek justice repeatedly refused extradition because the eight men in Turkey would receive an unfair trial. Three of the soldiers have now been granted asylum in Greece.