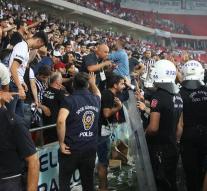 During the Turkish Super Cup Cup, supporters of Konyaspor, from Conservative Anatolia, scanned their accusations of torture with the Kurdish PKK. Besiktas supporters answered with a song that is popular among secular opponents of Turkish President Erdogan.

Fans of both clubs also threw objects on the ground, including a knife flying by the head of Portuguese player Quaresma van Besiktas. After the 2-1 victory by Konyaspor, hundreds of supporters floated the field to fuse each other.

The Turkish Football Association is considering disciplinary measures against the clubs according to Turkish media.