Home / World / Turkey holds on to offensive in Afrin 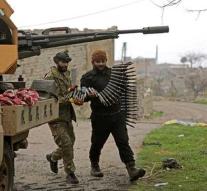 istanbul - Despite sharp criticism from the United States, Turkey does not feel bound by the UN resolution on a truce in Syria. The country plans to continue its offensive against the Kurdish YPG militias in Afrin.

Turkey does not see itself as one of the warring factions and conducts a fight against 'terrorist organizations' in the northern Syrian Afrin region, the Foreign Ministry said in Ankara on Wednesday. In addition, Afrin is not explicitly mentioned in the text of the resolution as a region where the humanitarian situation is worrying.

Ankara responded to statements by the American spokesperson for the Ministry of Foreign Affairs. That Tuesday emphasized that the UN demands a cease-fire throughout Syria and advised Turkey to re-read the resolution text.

Turkey sees the YPG as a Syrian branch of the banned Kurdistan Workers Party PKK and thus as a terrorist organization.