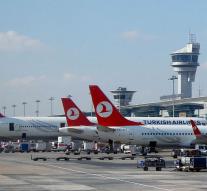 - Turkey has arrested eight Moroccans suspected of links with Islamic State. They are sent back to Morocco, authorities said Thursday.

The eight arrived Tuesday on a flight from Casablanca to the Ataturk airport in Istanbul and claimed to be on vacation. However, specialized interrogators noted that they were suspected militants.

Turkey is under pressure because of border control. At least two of the terrorists who carried out the attacks in Paris, it is said that they entered Greece via Turkey and the EU. According to Turkish media, the eight Moroccans planned disguised as refugees to travel to Germany, but this was not confirmed by the authorities.