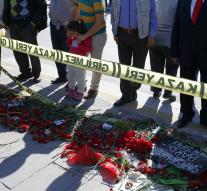 - The Turkish police on Tuesday around thirty potential militants from Islamic State (IS) held with an action in the city of Konya, reported news agency Dogan.

The battle comes a day after a series of police operations started against possible IS- groups, where several houses in the southeastern city of Diyarbakir are invaded. Seven militants were slain while and twelve people were captured.

The Turkish authorities operations against suspected IS cells have increased after a double suicide bombing in Ankara, where on October 10 over a hundred people were killed. Turkey attributes to IS the attack.