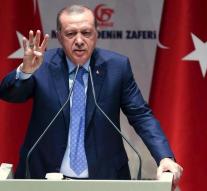 berlin - The Turkish government imprisons Germans to put pressure on the Federal Republic to deliver Turks in Germany to Ankara. Here, German diplomats and people at the Foreign Ministry in Berlin are now convinced, reported the newspaper Bild.

President Erdogan would have offered a couple of weeks ago to exchange German journalist Deniz Yücel against two high Turkish officers who fled to Germany after attempting a coup last year in Turkey. In connection with the coup attempt, 22 Germans were arrested in Turkey, nine of whom were still in the cell.

On Thursday, Ankara has a German demand for the release of a group of human rights activists, including a German, as an unacceptable interference in cases involving only Turkey. The German Foreign Minister Sigmar Gabriel broke down on the North Sea in Berlin to take the next step in the German-Turkish crisis on Thursday.