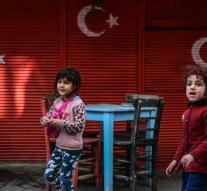 istanbul - Turkey has reached a population of 80 million. The Turkish statistical office reported that at the end of last year the country officially had 80.8 million inhabitants, nearly one million more than a year earlier.

Almost 25 million of the inhabitants live in three major cities, Istanbul (15 million), the capital Ankara (5.4 million) and Izmir (4.3 million). A minority of Turks live in rural areas. The average age in 2017 rose slightly to 31.7 years.

There are probably no statistics available for different population groups for political reasons. It is estimated that around 20 percent of the population is Kurdish and over three-quarters is Turkish.

According to the Turkish Ministry of Foreign Affairs, more than 6 million Turks live outside of Turkey. There are many Turks or people of Turkish origin living in Western Europe, especially in Germany, the Netherlands, Austria and Belgium.