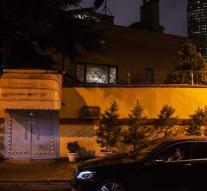 washington dc - Employees of the Turkish government have told colleagues from the United States that they have video and audio evidence that the journalist Jamal Khashoggi was killed in the Saudi consulate in Istanbul. The Americans say to The Washington Post that especially the audio evidence is very strong. It would be heard that Khashoggi is arrested, tortured and eventually killed and cut into pieces.

The American government officials think that this is the reason that the Turks were so quick that Saudi Arabia was behind the murder. The Turkish secret service does not want to release the material, because then it becomes known how foreign embassies are tapped.

Khashoggi is a Saudi journalist who always had close ties with the royal family, but writes critically about the current crown prince, Mohamed bin Salman. He went to the consulate in Istanbul last Tuesday to arrange things for his marriage. He did not leave the consulate anymore.

The US House of Representatives wants all arms sales to be stopped by Saudi Arabia. President Donald Trump is afraid that the weapons are then bought in China and Russia, and therefore wants the trade with the Saudis to continue.

Turkey and Saudi Arabia are going to put together a team that will investigate the disappearance of Khashoggi.