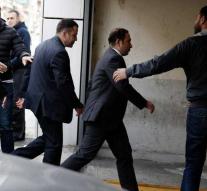 ankara - Turkey accuses Greece of violating international law by not handing out eight Turkish soldiers who, according to Ankara, were involved in the failed coup in 2016.

Turkey and Greece are at odds over different issues. Ankara is angry, among other things, by refusing Greece to return the military, who fled to the country shortly after the coup in July 2016 and applied for political asylum.

On Monday, the two NATO allies were still at risk of hoisting the Greek flag on an uninhabited island in the Aegean Sea. Turkey has removed the flag. Earlier this month, a Greek fighter plane crashed after fighting with the Turks.