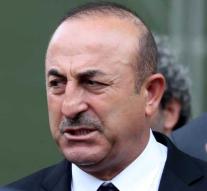 ankara - Turkey has suspended the refugee deal with Greece. The reason is the diplomatic conflict about Turkish soldiers who fled to Greece, reports Turkish media. Turkey demands that these soldiers be extradited.

'We have a migrant deal with the EU. Which is being implemented. There is also a bilateral agreement on taking back people with Greece. We have suspended this agreement, 'said the Turkish minister Mevlüt Çavuşoğlu (Foreign Affairs) according to Daily Sabah newspaper.

According to the newspaper Hürriyet, the minister referred to agreements about the return of migrants who traveled from Turkey to Greece. Turkey is taking back such migrants. In return, Syrian refugees in Turkey are accommodated in the EU.