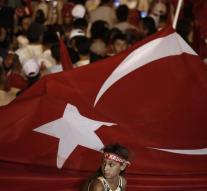 ankara - The Turkish parliament has renewed the state of emergency in the country again by three months. The emergency was declared a year after the failed coup in July. Earlier this day, it was known that the Turkish authorities ordered the arrest of 127 people, suspected of involvement in the attempted coup. Especially businessmen and journalists have been arrested.

Ankara sees the spiritual fethullah Gülen living in America as the brain behind the failed coup. Gülen himself has denied involvement until now.

In the aftermath of the coup attempt, approximately 150,000 people were fired or suspended from public and private sector jobs. Also, more than 50,000 people have been arrested on suspicion of involvement in the attempted coup.