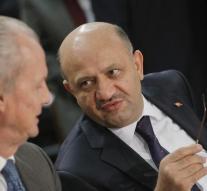 brussels - Now the number of refugees from Turkey reached Europe has declined dramatically, there is no reason for NATO's naval mission in the Aegean Sea. That said, the Turkish Defense Minister Fikri Isik.

Isik was at a meeting with his colleagues from other NATO countries. He said this is because Turkey refugees prevented from making the crossing to Europe, NATO does not have to extend the mission beyond December and NATO ships no longer have to patrol off the Turkish coast. ' This was a temporary mission and purpose of this temporary mission is accomplished. ''

To the massive flow of refugees to Europe to stem the European Union signed an agreement with Turkey earlier this year year. The European Commission said last month know that there are now arriving daily only 85 migrants in Greece. Last year there were thousands of times a day.