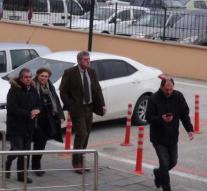 istanbul - The two Greek soldiers who accidentally crossed the Turkish border remain in pre-trial detention. The judge in the city of Edirne dismissed the protest that their lawyers had filed against the arrest, news agency Anadolu announced on Monday. The reason given was that the couple do not have a place of residence or stay in Turkey and that digital data have to be analyzed.

The Greeks, a lieutenant and a sergeant-major, were arrested on Thursday. They said they were lost in the snow and therefore ended up on Turkish territory. The duo was nevertheless put in prison on suspicion of espionage.

Turkish Deputy Prime Minister Bekir Bozdag rejected rumors of a possible exchange of prisoners. 'They are two different things. 'Ankara is demanding the extradition of eight Turkish soldiers who fled to Greece by helicopter after the failed coup in July 2016.