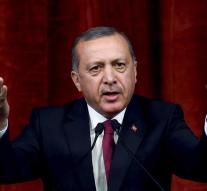 - Turkey dismisses back a lot of soldiers. It is about 1389 staff of the army for alleged links with the spiritual Fethullah Gulen who was according to Turkey after the failed coup.

That state news agency Anadolu reported Sunday. The statement comes hours after President Recep Tayyip Erdogan said he wants to make some changes in the armed forces, such as the closing of military academies and measures to bring the military firmly under government control.

Turkey accuses supporters of Fethullah Gulen, a Muslim cleric who lives in self-imposed exile in the United States, the failed coup on 15th and 16th July. Gülen has denied the accusations and condemned the coup.


Last Wednesday, President Erdogan dismissed all officers in 1684, of whom 149 in the rank of general.

Saturday it was announced that Turkey has freed more than 750 soldiers were arrested after the failed coup. The prosecutor gave orders to release them after they had issued a statement. Some 230 remain trapped others.

Approximately 60 000 people across the country were arrested after the failed coup, dismissed or suspended.