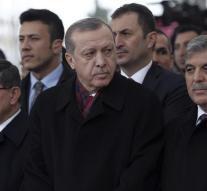 ankara - The Turkish government on Tuesday by decree nearly another 15,000 officials, soldiers, police and others dismissed in connection with the failed coup in July. Also 375 associations, news media and other institutions were dissolved.

The Turkish government failed coup writes to supporters of the cleric Fethullah Gulen. Simultaneously with the followers of Gülen, the government has also addressed politicians and institutions which have links with the outlawed Kurdistan Workers Party (PKK).

Among the people who were fired Tuesday nearly 2,000 members of the armed forces, around 7,500 police officers and 400 members of the gendarmerie, as well as more than 5,000 employees of public institutions.

In total more than 110 000 soldiers, policemen, judges and teachers dismissed or suspended. 36. More than 000 people trapped awaiting trial. Turkish President Erdogan said that the reintroduction of the death penalty has not been ruled out. During the coup were more than 240 deaths.