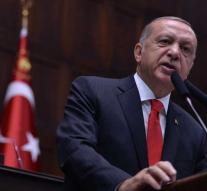 ankara - Turkey dismisses more than 18,000 civil servants, including police officers, soldiers and academics. That is in a Sunday published decree. The redundancies come on the eve of the expected lifting of the two-year state of emergency. The dismissed civil servants are accused of having links with terrorist organizations or with groups that act against national security \u0026 # x27; \u0026 # x27 ;.

Half of the number of dismissals concerns police officers. Furthermore, 199 academics and 5,000 soldiers lose their jobs. The decree follows the election victory of President Tayyip Erdogan last month and one day before taking the oath for a presidency with more power than before.