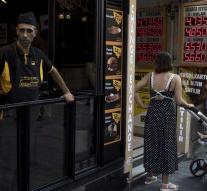 - Turkey gets a new tap. The Turkish economy was further downgraded by credit rating agency Fitch, from the status BB + to BB, with a negative outlook. The subsequent decline of the Turkish lira was, however, curbed by support from the central bank.

The Turkish currency has fallen by more than 20% in value against the US dollar this year. Bonds went down in value after the debt was pushed deeper into the junk status thanks to the downgrading by Fitch.

On Monday, the downturn continued for a while, but the loss slightly changed when the central bank supported the market with short-term loans.

The budget deficit since June turned out to have risen further to the lowest level since December 2016.

Turks are increasingly being charged with hefty price increases. Inflation went to 15.4% in June. The chance that this inflation will quickly fall below 10% for citizens and businesses, Fitch considers low.

President Erdogan, recently re-elected, has tied more power to himself. His son-in-law Albayrak became Minister of Finance and replaced former Merrill Lynch director Simsek in which financial markets had long trusted. Last week, the stock market in Turkey dropped by 10%, partly in response to the appointment.

Fitch reports: 'The credibility of economic policy has bumped over the past few months. It will be a challenge to make the economy in that climate a soft landing. '

The maleus expands to the corporate loans. An increasing number of loans are not being repaid, GlobalSource Parnters observes against Bloomberg, while the quality of many corporate bonds decreases.