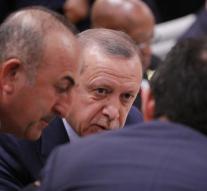 ankara - Turkey will take measures against the Greek Cypriot exploration of oil or gas around Cyprus. That said the Turkish Foreign Minister on Thursday. According to him, the Turkish Cypriots have the rights about those reserves.

The Turkish Ministries of Foreign Affairs and Energy work together to take steps against the 'unilateral' plans of the Greek Cypriots, said Minister Mevlut Cavusoglu. Whatever the steps involved, he did not add it. The steering of a drilling rig shows the Greek 'insanity' about the reunification talks that failed last week, Cavusoglu added.