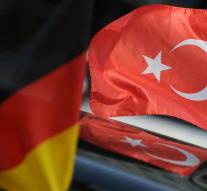 ankara - The Turkish Ministry of Foreign Affairs called on the German ambassador on Saturday. According to Anadolu, Anadolu had to explain why he had a cultural meeting of Kurds in Cologne. Ankara accuses the German authorities of having granted 'terrorist propaganda'.

At the Kurdish festival in Cologne, thousands of people participated in Saturday. The motto was 'Freedom for Öcalan- a status for Kurdistan'. The participants thus demanded the release of the lifetime condemned leader of the Kurdish labor party PKK, Abdullah Öcalan.

According to local media, a lot of police were under control. That could not prevent the appearance of some protests by a counter-demonstration of nationalist Turks. Last year the international event was canceled for safety reasons.