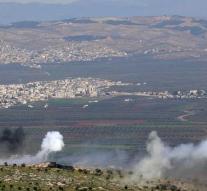 damascus - The Turkish army attacked the Syrian region Afrin on Tuesday with grenades. This was reported by the Syrian state press agency Sana. The bombing was short after Syrian militias supporting the regime of President Assad entered the region.

Afrin is in the hands of fighters of the Kurdish YPG. The militias are there to help defeat the offensive that the Turkish army has begun in the region. YPG confirmed the arrival of the militias.

The YPG has called upon the Assad government to send troops to protect the borders. That happened after the Turkish government announced the offensive in the area. Ankara wants to prevent the Kurds from making a connection between the Afrin enclave adjacent to Turkey and the larger Kurdish area east of it.