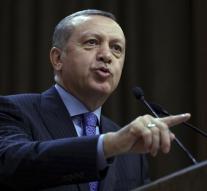 ankara - Turkish warplanes have late Sunday attacks on targets of the Kurdish PKK movement in northern Iraq. The aircraft destroyed in accordance with the Turkish armed forces include a headquarters of the banned Workers' Party.

Hours before the bombings had the Kurdish group TAK, a radical offshoot of the PKK claimed responsibility for the attack in Istanbul. There came this weekend, dozens of people were killed by two bomb blasts at the stadium of the football club Besiktas.

In Turkey, the authorities into action. Police arrested early Monday morning 45 officers from the pro-Kurdish HDP Istanbul and the city of Adana, reported state news agency Anadolu. The Turkish authorities accuse the opposition party there often an extension of the PKK.