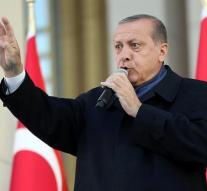 istanboel - The Turkish authorities have blocked access to online encyclopedia Wikipedia on Saturday. This is reported by Turkey Blocks, a group that monitors internet traffic in Turkey.

Turkey Blocks discovered the blockade on Saturday morning early. It is about all editions of the online encyclopedia. Why the site is blocked is not known.

When people try to access the webpage through Turkish ISPs, they are notified that the site could not be reached because the connection could not be established due to an error.

Several internet watchdogs blame Turkey regularly for blocking social media such as Twitter or Facebook. This was especially the case after the military coup.

The government has denied in the past that it blocks websites. According to the authorities, there are often disturbances after major events, which cause peaks in the Internet traffic and crash. But technical experts from the monitoring groups say that the blackouts on social media are deliberately caused.