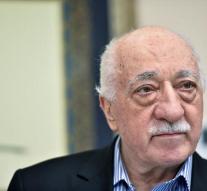 - Turkey has formally to the United States submitted a request for the extradition of Fethullah Gulen. The request is not made in connection with the attempted coup in Turkey last month, said the Muslim cleric was involved, according to the Turkish government.

,, We can confirm that Turkey has requested the extradition of Gülen, '' said a spokesman for the US State Department. What reason did give Ankara the extradition request, released the spokesman in the middle.