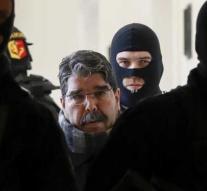 Turkey has linked Muslim to two attacks in Ankara. He denies the accusations. Muslim was formerly the head of the PYD, a political party in Syria. Turkey sees that organization as an extension of the banned PKK movement.

The Turkish request may come too late. A Swedish source said that Muslim has been in Stockholm, but has since left the country. The Kurdish politician was recently arrested in the Czech Republic at the request of Turkey. However, he was released for the time being on condition that he did not leave the EU.