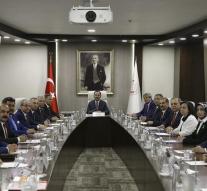 - The Turkish authorities on Monday issued an arrest warrant for 42 journalists. This was reported by Turkish broadcaster NTV. It is yet another wave of arrests following the failed coup by part of the army.

The well-known commentator and former parliamentarian Nazli Illicak is one of the journalists for whom an arrest warrant has been issued. The Turkish authorities have over 60 000 soldiers, police officers, judges, teachers, civil servants and others arrested, suspended or dismissed in the days following the coup attempt.