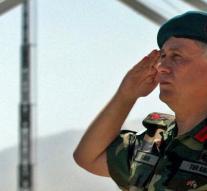 ankara - Turkey Umit Dundar Saturday appointed the new deputy army chief. The fate of his predecessor is unknown, reported a high Turkish official. Previously suggested local media that he would be kidnapped.

After the chaos that followed the coup attempt by a section of the Turkish army was unclear where his predecessor was, appointed the Turkish authorities Dundar.

Previously, he was head of the First Army, a group of divisions within the army.


As part of a major purge in the armed forces are provisional five generals and 29 colonels from their post removed because of their role in the coup attempt.