Home / World / Turkey and US send YPG away from Manbij 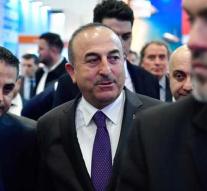 ankara - Turkey and the United States are going to pilot the Kurdish Syrians of the YPG militia from Manbij. The Turkish Foreign Minister Mevlüt Cavusoglu said this Tuesday. According to Cavusoglu, a plan for the withdrawal of the YPG (People's Protection Units) from the Syrian location approximately 80 kilometers northeast of Aleppo is being made during the American-Turkish consultations on 19 March.

Turkey wants to reduce the YPG, which dominates large parts of northern Syria. Turkey regards the YPG as an extension of the PKK terrorist movement. The US supports the Kurdish fighters in connection with the fight against Islamic State. Cavusoglu said that weapons that the YPG received from the US are returned.

If the American-Turkish plan fails, Turkey will intervene militarily, the minister said. Turkey is now doing it 100 kilometers to the west in the Afrin region.