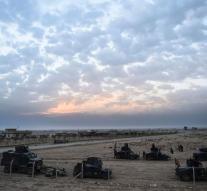 ankara - Turkey wants only after the fall of the Iraqi IS stronghold Mosul and the completion of its own operation in Syria advance to Raqqa, the unofficial capital of the self-proclaimed caliphate. That said the Turkish Deputy Prime Minister Numan Kurtulmus Monday.

According Kurtulmus it ' both military and strategic '' wiser can only begin an offensive against the Islamic State Raqqa reports in Mosul. The deputy prime minister should wait until the Turkish military operation in Syria.

US Secretary Ashton Carter (Defence) took earlier this month, a different view. He said that Washington expects the battle for Raqqa coincides with the offensive in Mosul.

The Turkish government made earlier are already known willing to participate in an attack on Raqqa, provided that Kurdish fighters are excluded from participating in the struggle.