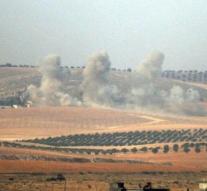 According to the army that happened near the border town Jarablus. The army is said to have taken to avoid civilian casualties measures.

The Syrian Observatory for Human Rights reported Sunday that at least 35 civilians were killed in Turkish air and artillery bombardments near Jarablus. Turkey backed Syrian rebels fought south of Jarablus with rival militias backed by Kurds. According to the militia, there were no Kurdish fighters in the area.