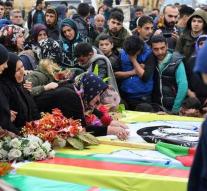 ankara - During the operation of Turkey in the Syrian Afrin region, three Turkish soldiers and eleven fighters from the Free Syrian Army (supported by Turkey) were killed. About 130 people were injured, the Turkish Ministry of Health announced.

Turkey began the attack on Saturday, against the Kurdish YPG militia, which is supported by the United States. Ankara sees this as an extension of the forbidden PKK. About 25,000 fighters from the Free Syrian Army support the Turkish offensive.

On the other hand, more than 20 civilians have been killed so far, human rights organizations report. The Turkish army said Friday that at least 343 militants in the north of Syria have been killed since Saturday.