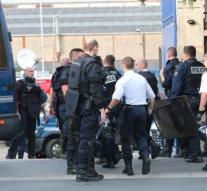 - Val d'Oise north of Paris has been restless in the night between Wednesday and Thursday for the second consecutive time after the death of a 24-year-old man who was arrested by the police.

During clashes between about 200 residents and 180 police officers were 15 cars and dozens of public bins set alight and petrol bombs were thrown at a school and a town hall. Nine rioters were arrested, but no one was injured, reported the public radio station France Info.

The unrest broke out after the death of a 24-year-old man, who was arrested as he tried to prevent the arrest of a brother who was suspected of violence and extortion. He would have had a heart attack during transport to a police station.


In 2005, many poor French suburbs were hit by violence after two boys were electrocuted when they were fleeing police tried to hide in a power house.