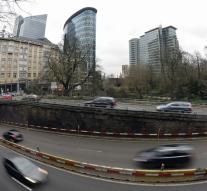 brussels - It is the fear of every motorist in Brussels: collapsing tunnels in the center of the city. Due to the falling pieces, police and firemen closed the 570 meter long Rogier tunnel on Tuesday afternoon. There were no victims and no cars were damaged.

Brussels has twenty-one tunnels for the flow of traffic. The 2.5 km longest, the Leopold II tunnel, runs underground. The Belliard tunnel can also be 2143 meters. But the system is urgent for renovation. According to Voka entrepreneurial organization, the state of the system is 'medieval.' '

In recent years there have been several incidents in different tunnels. There were concrete slabs down, or siphoned inside of rotten water. The 600 meter long Montgomerytunnel remained closed for ten months because a roof plate was softened. The Stefaniatunnel has been closed for a year due to cracks in the ceiling. On Twitter, the hashtag #tunnelgate is popular.

The region has promised to take all tunnels in the next ten years.