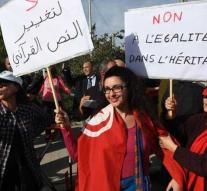 tunis - Hundreds of women have taken to the streets in the capital of Tunisia to claim the same inheritance rights as men. That is a subject that is usually seen as a taboo in the Arab world. In the North African country, women are allowed more than anywhere else in the region. Since last year, a Muslim woman is even allowed to marry a man who is not an Islamite.

The demonstrators walked to the parliament building in Tunis on Saturday and made it clear that they want to be compared to European women so that they can claim a fair distribution of an inheritance. It is still based on Islamic legislation, in which a man usually gets twice as much as a woman. 'In a civilized state I receive exactly what you receive' was a frequently heard slogan.