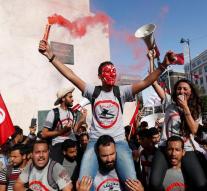 tunis - Thousands of Tunisians went to the street on Saturday. They demonstrated a law that gives amnesty to businessmen who have been guilty of corruption during President Ben Ali's regime.

Opponents of the law find that this law is a step back from the revolutionary spirit of the Arab spring in 2011. There was an end to the presidency of Ben Ali's autocrat.

According to the authors of the law, the amnesty law would be a great boost for the tormenting Tunisian economy. An estimated three billion euros would be expected to flow into the economy.

Since the spring of Tunisia, Tunisia has become a stable democracy, but it is facing economic problems and high unemployment.