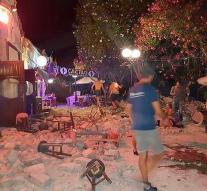 the hague - TUI, one of the largest tour operators in the Netherlands, explores how it's been with the Dutch on the Greek island of Kos that has been hit by a heavy earthquake. 'We currently have more than 2700 holidaymakers and our tour guides go along the hotels to see how it is with the guests and in what state of the hotels are there,' said a spokeswoman.

The airport in Kos is still closed until 14:00. 'For Saturday, two flights with holidaymakers from the Netherlands are planned. Whether they can actually leave the island is being searched. '

A flight from Transavia to Kos leaves Friday morning later than planned from Schiphol. Flight HV 5041 would depart according to schedule at 05. 45, but the flight is scheduled for 09.30. The device is packed with 186 passengers, according to Transavia spokesman.