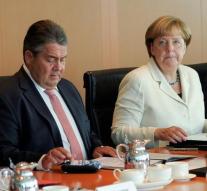 berlin - The talks between the European Union and the United States had failed the FTA TTIP. That the German Vice Chancellor Sigmar Gabriel said Sunday in an interview with ZDF.

According to Gabriel's little shot in the talks.,, If you ask the negotiations actually failed with the USA me, even though no one really wants to admit, '' said the vice chancellor. In fourteen rounds of talks that have been held in recent years, according to him reached on any of the proposed 27 chapters of the treaty agreement.

Gabriel was a lot more positive about CETA, a treaty which the EU and Canada is busy. However, he showed himself frustrated that TTIP and CETA are often lumped together.,, The debate has been very difficult because the agreement with the US, which are sheared with Canada over a comb. That's wrong. ''