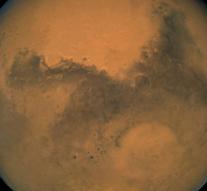 tucson - Mars billions of years ago may be affected by two huge tsunamis. The waves would have been 120 meters high and hundreds of kilometers came inland. The wall of water would be caused by the impact of so-called meteoroids, which tens of kilometers left behind large craters.

Possible traces of the two mega-tsunamis are found on a plain in the northern hemisphere of Mars. And maybe there were even more tsunamis. Mars has long since had running water on its surface. Scientists have since found increasing evidence in recent years.

The first impact would have hurled boulders land on. When the waves retreated towards the sea, the water would have formed channels. In the days afterward showed altered the coastline and the climate was considerably cooler. Millions of years later, at the second impact would particularly ice moved. The brine in it is still possible to be found in the surface of the planet. The brine can perhaps make clear whether there was ever life was possible on Mars.


The research was published Thursday in the science journal Nature Scientific Reports.