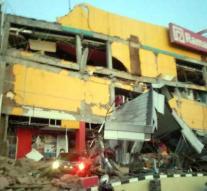 amsterdam - Update- The authorities of Indonesia confirm that a tsunami has hit the country. Several cities have been hit, including Palu and Donggala. Videos of the event circulate on social media. According to travel organizations, the affected area is hardly popular among Dutch people, although it is not clear whether there are compatriots in the disaster area.

According to a spokesperson for the crisis center, houses have been knocked out and families are missing. Communication is not possible because infrastructure has been destroyed. Assistance is hardly getting going, partly due to the darkness.

'The situation is chaotic', says Dwikorita Karnawati, director of the Indonesian meteorological institute BMKG. 'People are running around on the street. Buildings have collapsed. '

The wave would have been two meters high. A ship was dragged along by the current. Reports of fatalities are not there yet, according to the authorities, but that is in line with expectations.

On a video you can see how a tidal wave hits Sulawesi. A staff member of the museum in Palu confirms to The Jakarta Post: 'Yes, there is a wave on the coast. 'Then the connection was broken.

The images below circulate. Article goes on below.