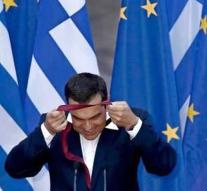 athens - The Greek government leader Alexis Tsipras has appeared in public with a tie for the first time since he came to power in 2015. The left-wing politician appeared on Friday evening with a dark-red copy around his neck at a group meeting of his party Syriza with the right-wing populist coalition partner ANEL (Independent Greeks).

'As you can see, you have to stick to betting. I have some trouble with it, but it will take some getting used to, 'he said after his entrance. Tsipras had promised the former Italian Prime Minister Matteo Renzi and the President of the European Commission Jean-Claude Juncker at the height of the financial crisis that he would wear a tie as soon as Greece had crawled out of the valley.

Renzi and Juncker immediately gave him one to be able to adapt to the European décor of jacket-jacket at important meetings in due time. Friday was the day. Greece is back on its own feet in August, with the support of a final credit of 15 billion euros.