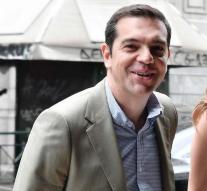 london/athens - 'The worst is clearly behind us,' Greek Prime Minister Alexis Tsipras summarizes the current state of economic recession in his country. The crisis brought Greece to the edge of the abyss. Currently, the economy is in an upward movement.

Tsipras, 42, said Monday in an interview with The Guardian, The English newspaper, that is happening very slowly, which seemed to be impossible for a while. The Greeks succeeded in libeling the crisis. The prime minister came to power after the September 2015 elections. He formed a coalition with the right-populist independent Greeks with his left-wing party Syriza.

The Prime Minister has managed to turn away bankruptcy with foreign support. To this end he had to take far-reaching cuts. 'When I arrived I had no experience and no idea of ​​the extent of the problem,' he confesses. As a result, he made big mistakes, 'especially by naming wrong people on key posts. '

National debt is still huge and complete recovery still far away. But the signs of improvement are there.