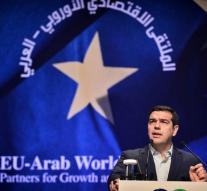 athens - The new Greek government, led by leftist Prime Minister Alexis Tsipras, is sworn in Saturday. The restart of the government Tsipras has seven new ministers in key positions, such as the Interior, Labour and Energy.

This Tsipras's main opponents within his own party who oppose the reforms needed for Greece from foreign creditors, pushed aside. Tsakalotos Minister of Finance and Foreign Minister Kotzias remain in place.